“Conformity is the jailer of freedom and the enemy of growth.” ― John F. Kennedy

Members of society that have been successfully conditioned, conform. They resign themselves, lose themselves, and succumb to sameness, uniformity – homogeneity. Groomed to follow. Conditioned to conform. Programmed to please, consume, and accept the status quo. Taught to be submissive, follow orders, and obey authority. Operating on autopilot as cogs in the rat race wheel greased by the desire to fit in, while begging to be accepted. Miserable, empty, stagnant, and stuck. As a result, they become reliant on the very system that oppresses, controls, and abuses them and the masses.

“One believes things because one has been conditioned to believe them.” ― Aldous Huxley

Conformity is the contrary to uniqueness, individuality, expressing your authentic self, and being empowered. Is it much easier and convenient to conform than to identify with who you really are than eject yourself from a system built on manipulation and illusion?

“The opposite of courage in our society is not cowardice, it’s conformity.” ― Rollo May 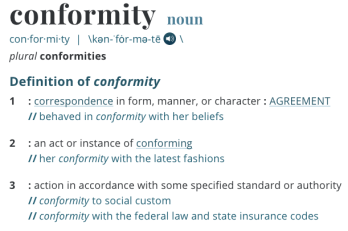 “A fair and just society offers equality of opportunity to all. But it cannot promise, and should not try to enforce, sameness.” ― Christina Hoff Sommers

Who benefits from a society of homogenous thinkers? Those in power, the ruling class, including bureaucratic, religious, military, and big business leaders. The power elite – “powerful people who hold a disproportionate amount of wealth, privilege, political power, or skill in society.” These power-players influence policy decisions with their actions, opinions, and actions.
Why would those in power want the populace to be conditioned and uniform?
How do they benefit from a society of conformists and followers? 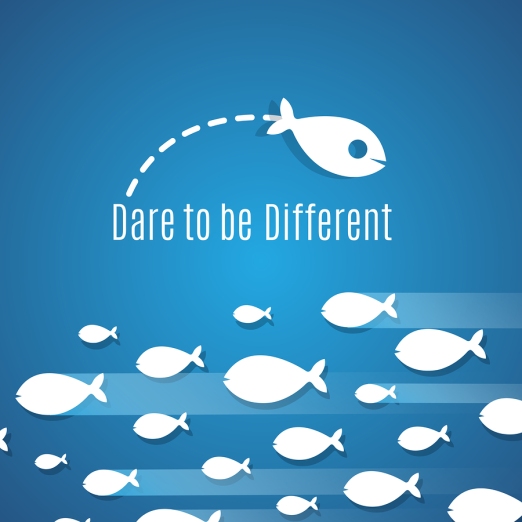 Conditioned clones are far easier to control. Literal crowd control mentality. Through this regulation of control, there is a false sense of security and perceived independence by those who conform and follow. It’s much easier to control a group with collectively similar beliefs, patterns, and behaviors, than it is to allow dissenters and resisters.

But what really happens when dissenters break out and challenge authority? Question the official narratives? Speak against those in power and the ideologies they push? They are often silenced, outcast, censored, called conspiracy theorists or crazy, denied being accepted, marginalized, and certainly not given corporate-owned media coverage and airtime.

How do the ruling class and the power elite condition?

Through the mass media’s repetition on television, radio, print and social media. Through the illusion of “choice” of media outlets and channels — when in fact they are owned by a select few, — only five to six media conglomerates in the United States. The grooming, brainwashing of what’s accepted is also embedded within society, culture, institutions, schools, and government. Expectations are carefully scripted within narratives and deliberately woven. Roles and desired behaviors, deliberately constructed. The conditioning becomes seamless, stealth, and unnoticeable, like the fish in water, “what water?”

Through the power of language, conditioning is implemented. Language and connotations influence minds, behaviors, perceptions, beliefs, and actions. Both the choice of language and connotations play a significant role in scripting what’s acceptable. To deviate from the “norm” and the noun, “social deviate, are often given negative connotations. A “rebel”, “rebellion”, and “to rebel”, also hold a negative charge in the context of what’s acceptable and preferred within society. The same holds true for “activists”, those who are “anti-establishment”, “radical”, and “counter-culture”. Many of these condescending and shaming terms are often synonymous with traitor, instead of being aligned with catalysts for change.

An outlier, a rebel, and a renegade do not exist within the limits; they break the boundaries and the norm. It’s the only way to survive from being swallowed up and engulfed by mediocrity. A rebel goes against the grain and prefers not to be corralled. Does what’s not popular and lives beyond the dominant culture ideals.

Be an outlier in a world of conformists.

Snap out of the endless brainwashing machine spin-cycle. Stop rinsing your brain with their water boarded indoctrination. Deviate from the clones and drones, the conditioned sameness, uniformity, and conformity. Outliers spawn originality. Innovative ideas emerge on the edges. These ideas live outside the box and beyond the lines of control and societal boundaries.

Revel in your independence and uniqueness. Discover who you are and not who you “should be” according to their “conditions” and “program”. Take personal inventory of where you conform and where you rest on the ledge as an outlier. Time to break out of the conditioning and the programs you’ve been trained to believe. Break up with this dysfunctional conditioned fantasy. The act of rebellion challenges the system, disrupts conventional thinking, and is a catalyst for growth and change.

“To be yourself in a world that is constantly trying to make you something else is the greatest accomplishment.” ― Ralph Waldo Emerson

Will you be the aberration? Are you willing to take a risk and step out of the crowd, the herd, and the herd mentality? It’s time for each of us to be the outlier in a world of conformists. It’s time to detach from the status quo, the puppet strings, and be bold enough to walk on our own towards an improved reality that we co-create.

What possibilities exist outside the bounds of conformity?

Let’s pioneer this together and build something different ― outside the boundaries.

Join us by visiting Sphir to sign up for pre-launch updates.

View all posts by gone

One thought on “Be an outlier in a world of conformists.”